The Clarksburg League for Service got its start in 1934, and since its inception it has continued to assist the less fortunate in the immediate area through it many service projects.

As the organization’s name indicates, ‘service’ is the key word among its members!

Although it is officially called the Clarksburg League for Service, its members are not strictly from Clarksburg; and the helping hand that it extends reaches out to those throughout Harrison County.

In the beginning, the League’s founder, Amy Roberts Vance, was instrumental in setting up the ‘In As Much Baby Clinic’ that served less fortunate children in Harrison County.  However, during the League’s 83-year history, needs changed and so have the goals of the organization – somewhat.  While the baby clinic is no longer in existence, other worthwhile projects have taken its place and all of those projects still focus on lending a helping hand to those who need it.

For example, some of the League’s projects include giving scholarships to seniors in Harrison County Schools as well as additional scholarships (that can be ongoing) to those who are pursuing a career in the medical field.  The League also sponsors students to Boys State and Girls State.  In addition, they have adopted a project called the Harrison County Backpack Program that provides filled backpacks to students in need as well as warm coats to students in elementary, middle and high schools in the county.  Last year, they started a new program for Veterans, and they have increased that budgetary item this year; that program helps Veterans with clothing, shoes and personal care items. They also help the homeless, provide a summer picnic for residents at the Clarksburg Mission, and host an Easter Egg hunt at the Clarksburg-Harrison Library.

“Things change in our world, and we continue to take a close look and see where there are new needs,” said new League president Pam Preston.  “We may not solve large problems in the long term, but we keep extending a hand to help changes come about for families.  We continue to evolve.”

Preston said that when there is a need, the organization is alerted and gets referrals from social service agencies, churches, and schools.

“The schools and their guidance counselors are a valuable source for us because they are there with the kids every day and are aware of their needs.  We try to be available to them and help supply those needs,” she added.

Amy’s Attic is currently the main focus of the League.  A project that was launched in 2008, the ‘Attic’ is filled with household items, cleaning supplies, personal care items, clothing, school supplies, etc. and is stocked just like a store.  Families who need help and have gone through the referral process receive vouchers and can shop there for needed items.  Those items are all free!

Preston explained, “Our organization raises funding; we go out and make the purchases of these stocked items; we carry them in, unload and arrange the stock.  Then people have the dignity of using their vouchers to actually shop for what they need.  Although no money is exchanged, those people are not just being given a hand-out; they can take pride in doing the shopping themselves.”

Preston reiterated the importance of outreach.  “We know it is tough for many families, and there are times when some children kind of raise themselves.  For example, some single mothers may be working two minimum wage jobs to make ends meet and simply may not have the time to make the connections to get a voucher to shop at Amy’s Attic.  We are trying to reach out to those folks even more and make it easier for families to get help.  Eventually, we’d like to fill a closet at area schools so that when people cannot come to us, their children won’t go without.”

You can read the rest of the article on the Shinnston News website: 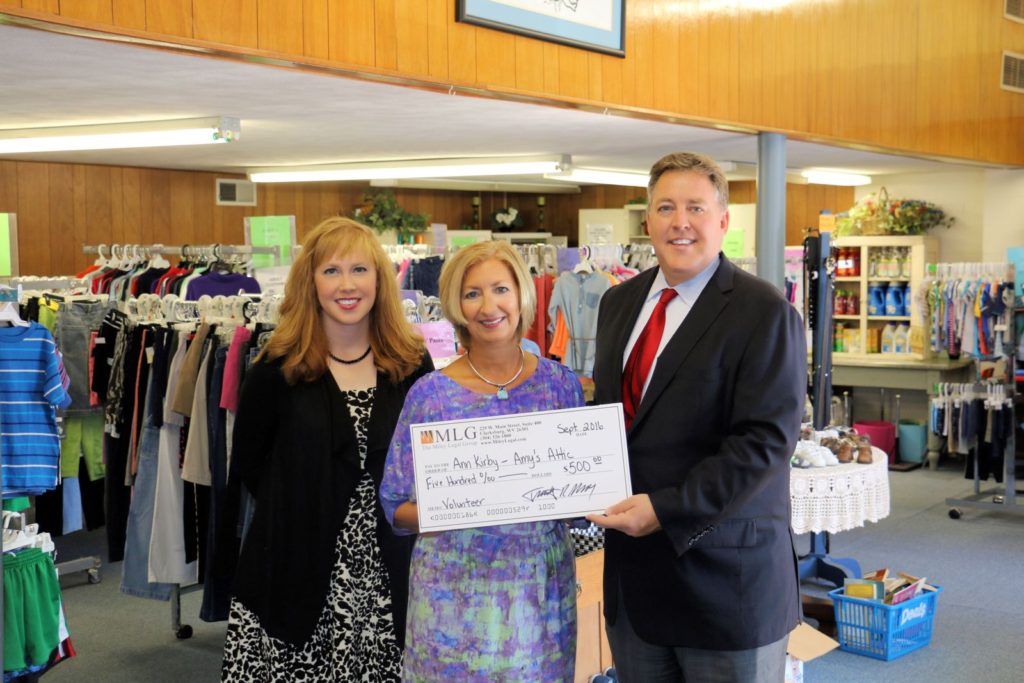 As the most recent down turn in our economy has affected hundreds of West Virginians, many in our area, vital resources have become more difficult to come across.  Families all across our region are becoming more reliant on private organizations to assist them in meeting their basic needs of food, shelter and clothing.  One of the many organizations that stepped up years ago, was the Clarksburg League For Service.  What began as a system to help support new babies and their mothers, as created by Amy Vance in 1934, to today’s storefront that assists hundreds of families, including new mothers and school children, to make ends meet and survive, if not thrive in our communities.  Amy’s Attic was created in 2004 to emulate the work of Amy Vance in gathering needed items for low income and struggling families.  The project was taken on and pushed forward by Ann Kirby who has spent countless hours setting up a shop, fundraising, building relationships and gathering items to make them available through an intricate network of community resource services in Harrison County. 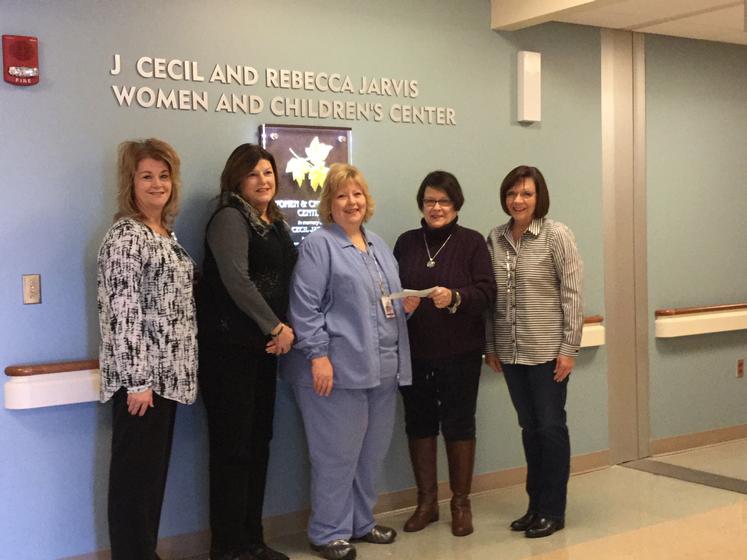 DONATION MADE. The Clarksburg League for Service recently made a monetary donation to United Hospital Center’s Embracing Invisible Wings, which is a bereavement support group for parents who have experienced a loss during pregnancy or infant loss. Pictured left is Annetta Payne, RN,CIC, infection preventionist at UHC and League for Service member; Lisa Ford, League for Service board member; Lee Ann Romeo, RNC, childbirth educator and lactation counselor at UHC; Clara J. Fuscaldo, League for Service president; and Jeannie Amos, past president League for Service. (Photo and Article courtesy of Connect Clarksburg at http://connect-clarksburg.com/photo-of-the-day.cfm?viewPhoto=0BF106CA7929DC29238170E8F96DBEAB) 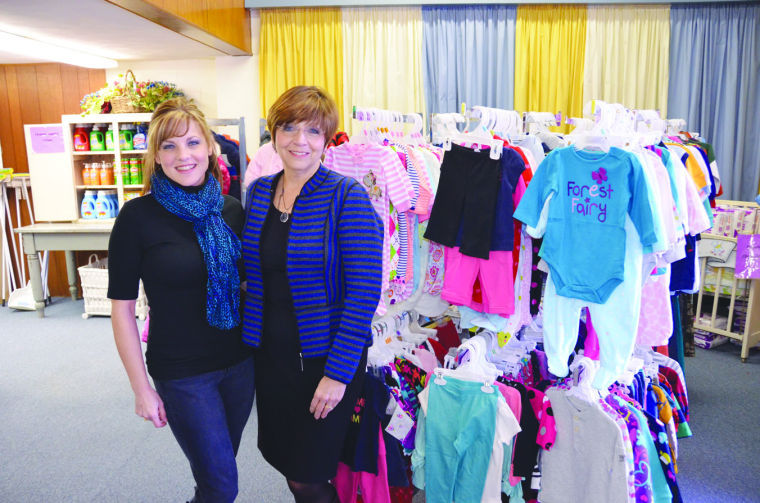 CLARKSBURG — When Sarah Starkey had a baby as a college student without health insurance, she was able to get care for herself and her daughter, now 16, through the Clarksburg League for Service’s mother and baby clinic at United Hospital Center.

Several years later, as a social worker earning her master’s degree, she was asked by a friend to join the League, which turns 80 years old this month.

“The League’s mission is to help women and children and the less fortunate, and often- times, the population the League serves is the same one I’m working with,” Starkey said.

“My job as a social worker is making sure that kids are safe and that they have what they need.”

When Starkey joined in 2007, she also signed up her mother, Jeannine Amos, who rose through the ranks and this year serves as president.

“It was hilarious,” Amos said. “She filled out my application, and I had people congratulating me about joining the League before I even knew.”

Clearly, Amos ended up enjoying the work she did for the Clarksburg League for Service, including spending time at Amy’s Attic in Glen Elk, the shop where mothers can get items for their babies. The shop was named after the woman who founded the Clarksburg League for Service in 1934, Amy Roberts Vance, the mother of Cyrus Vance, U.S. secretary of state during the administration of President Jimmy Carter.

“I started volunteering right away during my provisional year at Amy’s Attic, and I fell in love with it,” Amos said. “I was hooked as soon as I started working at the Attic. I found it some of the most rewarding work that I’ve ever done in my life.”

Vance started the Clarksburg League for Service on Feb. 20, 1934, said Carolyn Reynolds Burnside, who wrote a history of the organization for the 75th anniversary five years ago called “Unto the Least of These: 75 Years of Service in Harrison County.”

“She invited 125 women to the Waldo Hotel, and they took it from there and organized the League for Service,” Burnside said.

Over time, the clinic’s physician and locations would change until finally ending up at UHC and eventually closing, but after 80 years, the Clarksburg League for Service is still going strong.

To read the rest of this article, visit the Clarksburg Exponent Telegram at http://www.theet.com/lifestyles/league-for-service-celebrates-th/article_6a60b0e8-9503-11e3-a5a0-0019bb2963f4.html